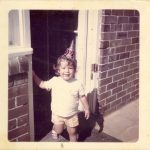 Then later raised in the southern suburbs of Sydney where my parents purchased there first home together.

First generation Australian, Of Greek-Egyptian/German-Austrian descent. My parents both young migrants first my Dad in 1953 followed by my Mum in 1964, they met that same year at the ‘ TABU’ Spanish night club in KINGS CROSS Sydney (My Dad 32 my Mother only 18). but they indeed shared a passion for Spanish- Latino music and dance; this was their chemistry.

Growing up within two very diverse cultures my exposure to a variety and broad range of music was indeed very broad and multi-cultural.

My passion for Music, Art, Singing and dancing developed from a very early age.

I actually was capable of using my parents HMV 2 in 1 amp turntable system at barely 5 years of age. My parents allowed me creative freedom, so my skills started to develop quite rapidly.

I had my own patio (stage) where I would sing, a tree house where I could lay and dream, the freedom to paint and draw use hammers and nails and make what ever I wanted to always with the music keeping me company music was my unconditional love and best friend.

Around the same time I was blessed with a baby brother. Unfortunately Anthony was not blessed with hearing nor mobility. This would change and shape my life forever.

Music however was there ; a companion to guide me and give me the comfort I craved it was indeed a constant in my life.

Music in our home ranged across a broad spectrum of genre’s.Spanish – Latino, Greek, Arabic, German folk, Country, Rock n Roll, Rock, Blues, Jazz and of course we all shared a common interest in what was evolving; ‘DISCO’ .

ABBA was a huge hit at home. In fact my Mother dragged myself my best friend with disabled brother to the top of the grand stand at the Sydney Cricket Ground in 1976 for what was my first live concert ABBA.                   I remember it was $9 a ticket and I was 9 years old.

I started collecting music around 1973 and as soon as i could get my hands on a portable tape deck I would listen to the radio and make compilation tapes for my friends I was always the DJ of the group. I would even record my records without a direct connection between tape deck and turntable I had to record all the back ground sounds as well but I did my best until we got an AKAI stereo with separate components allowing me to plug directly into RCA in/ out recording straight from the turntable into the tape deck.

My interest in recording music developed from about 1978.It was such an amazing time to be young and growing with music and sounds that were developing from new technology. New instruments made of different shapes and built of new innovative materials.

Music is influenced by sound and sound can be created in so many ways. Music is a universal language it is the most effective way to communicate. In fact drums among the African tribes was like an ancient mobile phone, this is how tribes communicated with each other.

Everything in life is influenced by sound and numbers, universe meaning ‘ one rhythm ‘ language is based on a rhythm even creating a life is done with rhythm.

Music is a universal communication.

From the tail end of the 70’s right through to the tail end of the 90’s all soulful house genre’s of music evolved from Disco, POP, 80’s FUNK, New Wave, Synthesizers, electronic drums, key board samplers DJ mixers, Technique 1200’s 12’ singles Dance party’s etc …everything was just developing so rapidly into a music Mecca for dance-music and a booming DJ culture.

How ever there was the HIV epidemic that still lives with us today, this also contributed to the vibe at the time. Yes there was fear and anxiety of what would become of our friends and their futures ?

This all contributed to the party vibe as being alive became a celebration.

My first residency was in 1990 at the cricketers arms hotel where I DJayed Sunday afternoon initially.           Then I was there every Friday night until it shut in 1992.

I then began my own mobile DJ business and began playing a lot of private parties & functions and gigs within our own private underground scene.
I played  Club 77 on William street East Sydney, Top-Gun in Newtown and Banta room on Oxford st Darlinghurst Sydney Australia and various other venues as a guest DJ.

My passion for music will never change my passion to DJ will always be there but my desire to incorporate all my gifts and talents is quite profound..

I have studied music business management and doubled up on  similar modules when studying sound and technology. I am a fantastic co-coordinator.

Life certainly is a journey and I often wonder what we are being prepared for, all of us have a purpose and whatever your journey has been your experiences will be valuable to assist others in the next realm of eternal life.

I care about the planet and where we are heading but it starts at home. If we shift our own thoughts in our own lives soon that shift will be in sync with the rest of the planet.

Social media and it’s ramifications are now being felt. In negative and positive ways, it’s how we choose to embrace it.

Like everything in life there are good and bad aspects but what is positive about social media it’s making the world smaller and it’s linking us together and breaking down barriers.

Creative Communication being exposed to spread the word of Love equals Peace.